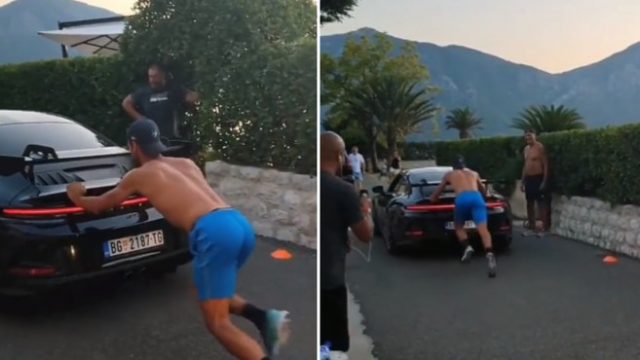 The news piece that accompanied the image to the left, can only send shivers up the spine of any and every single athlete that wants to reach the top of their sport. This is not an unlucky individual that, through poor oversight, run out of gas and now pushes the car towards the closest station. It is not a rich kid (based on the Porsche of the picture) that gets to pull their own weight after a mistake.

The person you see in this photo is none other than Novak Djokovic. The two persons standing and watching him are his trainers. 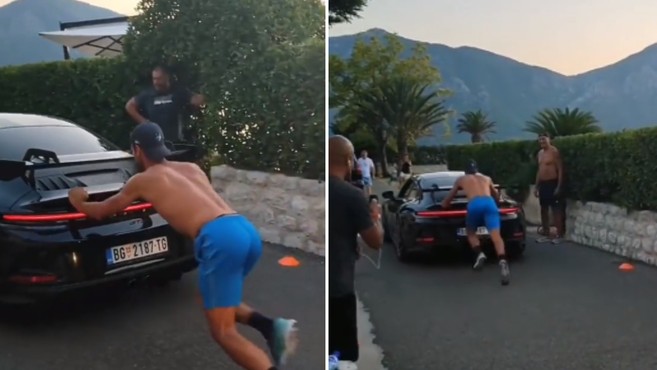 The Serbian superstar is supposedly in Montenegro enjoying a few days of vacation time. However, he does not stop training. Part of his regimen is to push cars in straights and upward slopes to keep his strength up for the upcoming tournaments. He is 35 years old and he needs to compete with youngsters like Carlos Alcaraz, Daniil Medvedev, Stephanos Tsitsipas, Andrei Rublev, and others, whose main features include explosively powerful strikes and long-lasting stamina. And he needs to be able to compensate.

The video uploaded on TikTok shows him pushing other, even heavier vehicles, as well. However, the real piece of news is not that he is taking this sort of hardship.

The Moral of The Story

It could be argued that up to now, his greatest motivation for exerting himself, have been his two major rivals. Roger Federer and Rapha Nadal. The first one is all but retired now at the age of 40, while the second has suffered a number of injuries. So, Djokovic had to find new ways for an incentive.

Recently he broke the tie that had existed between the three tennis legends, with 20 Grand Slam titles each, by winning his 21st at Wimbledon in 2022. A record that can still be threatened and surpassed by the Spaniard rival. The Serbian has always maintained for himself that he wants to enter the pantheon of athletes who set long standing records. So, he needs to keep up the hard work. He needs to send the message to the younger generations that they can never stop working hard. Not if they want to reach and stay at the top.

His quality has never been question. His physical condition has never been doubted. None of those is his main tool for being where he is. That comes out of his personality and most of all the power of his mind. It has never been any aspects of his game that gave him the edge. It has always been the way that he could impose his will upon his opponents that provided the advantage. And these pictures are the undeniable proof for the answer to the why.

After seeing this, there should be no question left unanswered for the reason that all of the best bookmakers online, will keep regarding him as the favorite to win any and all competition that he participates in. It doesn’t mean that he will win them all. It just means that every time he shows up at a court, it is the greatest likelihood that he will.